History of the Royal Castle in Chęciny

The Royal Castle in Chęciny was built on a rocky hill top (9367 mamsl) at the turn of XIII and XIV century. The first references to the castle appear in Władysław the Short’s document from the year 1306, in which he stated a confirmation for the entrustment of the castle, together with eleven villages, to a Bishop of Cracow, Jan Muskata (with whom the prince had settled a temporary dispute for purely political reasons). In the document, the royal castle (castrum nostrum ducale), is specifically mentioned. However there is some evidence that in the year 1308 the fortalice was back in Wladyslaw the Short’s hands. Supposedly, at that time, the castle in Chęciny was a centre of chivalry administration, and in the later decades of XVI century, it became a county’s judicial abode.

The fortalice was a building of high importance; constituted the centre of the political life and was the place where in the years 1310, 1318 and 1331 the magnates and chivalry conventions were being held. For the fear of the Teutonic Knights, in the year 1318, the archbishop Janislaw deposited the Treasury of the Gniezno Archdiocese in there. In a chapel, which was built on to the fortalice by Władysław the Short, the royal treasury had been casually kept.

The fortress was one of the places of the concentration of the Polish military forces fighting against the Teutonic Knights. Władysław the Short, going off to battle of Płowce, on June 14th, convened the first “Polish Lands Convention” of the prime dignitaries and state officials in Chęciny (that event is often considered as the beginning of future parliaments). In the middle of the XIV century, the castle was expanded by Casimir the Great and was considered as one of the most powerful Polish fortalices (never conquered during its glorious times).

From the end of the XVI century, the fortress served as a prison. For example, Andrzej the Hunchbacked (the oldest member of the Olgierdowic family) spent ten years there. He was Władysław the Short's half-brother and in the same time his and Hincza from Rogów's fierce enemy. Andrzej, „imprisoned in a sordid tower in Chęciny, almost yielded up his spirit because of the stink of the prison”, as Johannes Longinus described it in his „Chronicles”. After winning the Battle of Grunwald in the year 1410, the important Teutonic prisoners of war were kept imprisoned in the castle. Also Michał Küchmeister, (later the Grand Master of the Teutonic from the years 1414-1422) after being taken prisoner in the Battle of Koronowo, was imprisoned there.

The garrison of the castle, consisting of 150 members, in times of war, used to block the enemy's movements on the roads crossing Chęciny. In times of peace, the garrison used to maintain the roads and ensure the safety of the travelers.

The castle used to be the residence of Royal Families, queens and widows as well. Adelaide - Casimir the Great's second wife and Elisabeth – his sister, who was reigning on behalf of her son Louis I of Hungary, lived in the castle. Together with her enormous treasury, Queen Bona lived in it too. When she was leaving Chęciny, her treasury was transported by 24 horse-drawn wagons. There were 140 horses included in the operation. During the plague of 1425, Ladislaus, Jagiello's son found a shelter in the castle. A report from the lustration from the year 1569 mentions a need to repair the castle and the difficulties with it, resulting from water shortages. The process of building the well (which elements are still visible in the lower castle's yard) are also mentioned in the report.

A notable moment marking the beginning of the end of the significance of the fortress was the year 1588. That was when the seym permitted to direct the land registers of the Chęciny district from the castle, to the church. In the Times of Rokosz Rebellion in the year 1607, the castle was conquered by trickery by rebellious divisions; the buildings were set on fire, the armoury was stolen and the fortifications were severely damaged.

In the year 1610 the starost of Chęciny and the crown swordsman – Stanisław Branicki restored and expanded the castle. In the year 1657 in the era of Swedish Deluge, the Chęciny fortress was destroyed by Rakoczy’s troops. After that, it was restored again. However, in the year 1707, the Swedish troops burned the castle, which then was no longer the residence of the starost. The castle’s cannons launched for the last time on 11th of July 1787 in honour to the king Stanisław August Poniatowski while his return journey from Cracow to Warsaw via Chęciny. 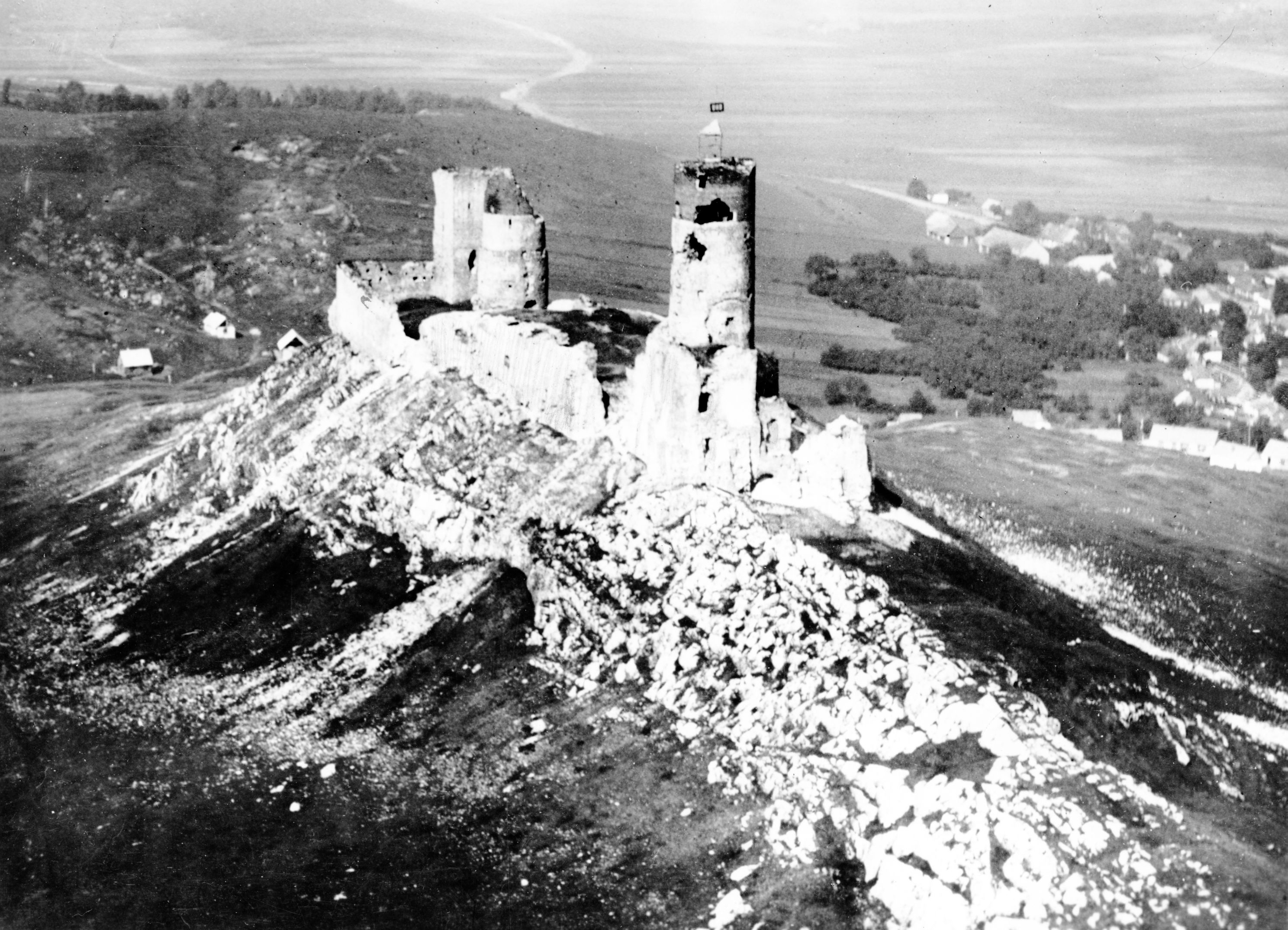 After the Third Partition of Poland the castle started to fall into ruin. That was when even the residential building, housing the starost’s chambers became deserted. The castle walls were severely damaged by the local population who was free to use them as the building materials and weapons during the First World War.

The first maintenance works of the ruins of the castle were performed in the 1880s. Not without a reason Julian Ursyn Niemcewicz called them „the finest Polish antiquity heritage site”. In the year 1947 the Provincial Conservator entered the buildings into the Register of objects of cultural heritage and classified them as the first, the highest group possible in the country. As a result of further works carried out in the years 1948-1949 the towers of the castle were renovated. Until now, various works are being carried out in order to secure the buildings, which are now classified as a „solid ruin".

The castle is divided into two parts: the older one (top part) extending between two round shaped bastilles, and the younger one (lower part) with pointed-arch gate and quadrilateral bastille, which was built on to the castle in the XV century. The entrance to the castle was  located on the eastern side, proceeded through a drawbridge and a gate lowered during the night, secured with a crate (so-called portcullis) which was located in front of the bastille. --> The plan of the castle

The gate was adherent to the tower, which was making the point more defensible. On the other side of the bastille, there is a vaulted room, in which, according to a legend, the castle chapel with the royal treasury was located.  By the northern walls, there are the ruins of the residential building, with its window openings and vaulted cellars remaining. The second of the two round shaped bastilles served as the last resistance point in case of a siege. (thick walls and food stocks made it possible to await the relief there).

The bottom part of the castle functioned as an outbuilding. In the middle of the castle's yard there is a well's mouth, which is 100 metres cored in the rock. Most probably, during the siege, there was an underground corridor leading to the church in Chęciny through the well. It was mentioned in the legend, which says that the castle has the connection with the Karczówka church.

According to other legends, in the dungeons located underground, queen Bona's treasury was left by her in a hurry, and also on the nearby hills, a galloping knight can be seen in the evenings.

Currently, the castle in Chęciny is one of the most visited heritage site of that type in Poland. Huge bastilles dominate in the area and are visible from the road leading to Cracow. The circle of the outer defensive walls, the two towers, the bastille and the foundation of the residential buildings are fully preserved up to now. In the eastern tower there is an observation point and when the weather is nice, the summits of Tatra Mountains are visible.